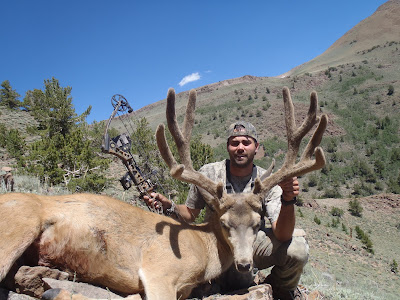 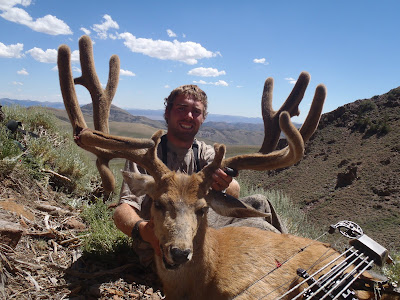 Hunting in my home state of has always been one of my favorite hunts. It is the hunt that I look forward to most out of the year. I like it because it feels like true hunting more than anything else. Don’t get me wrong every trip I take feels like hunting, but being a full time hunting guide can sometimes make some hunting trips feel a lot like work, especially when you are hunting with someone else. That is primarily why I chose to guide away from my home in other states in the first place. To keep the one place where I grew up hunting with family and friends strictly that- the place where I hunt with family & friends. A place that I don’t have to share all of my secrets with others. This is not to say that I will never guide here, or that guiding is not one of my favorite things to do, because in reality there is nothing I enjoy more than sharing my knowledge and being a part of helping someone else experience the hunting trip of their lifetime, it is just saying that it is a special trip for me.

The hunt started out like many before. I arrived a few days before the season, set up our base camp and scouted the area. My brother Jason was going to arrive mid afternoon on the second day of the season so I had a day and a half to hunt on my own. Of course I wanted to fill my tag but not as badly as I wanted him to fill his tag. This was his second season bow hunting and I wanted him to take his first deer with a bow. He put in 15 hard days of hunting the year before but I was only able to hunt five days with him. This year I was going to be able to hunt until he tagged out or called it quits which ever came first.

Opening day found me perched up on one of my favorite vantage points thinking back to previous opening days; especially the one four years earlier when my bow string snapped right before sunup.

The day came and went with minimal excitement and no sightings of a shooter buck. The deer were different this year, they were off their normal patterns, the bucks were smaller and solo or with does, and the big bachelor groups of the past were nowhere to be found.

My brother Jason arrived the next afternoon and brought his luck with him. By the evening we had pulled off three stalks, one taking us to within 30 yards of two 160- 170 class bucks. As bowhunting often goes we were on the wrong side of the tree for a shot before the jig was up and the deer ran off.

The next five days were more of the same lots of glassing, long hot hikes and few deer. One of my favorite places to hunt was well in a wilderness area but we were waiting for my dad to show up before heading in because we knew how much he wanted to pack in with us. Our dad was only a day out so I made the executive decision to pack in early and set up a base camp to meet our dad at.

The plan was to bivouac hunt the backcountry for five or six days then resupply if needed. We loaded our packs for the trip and headed up the mountain by that evening – leaving a little later than we had planned.

With our packs loaded down we headed to where I had planned on camping. As we hiked up the mountain I looked up to my left and spotted a huge four-point and another smaller buck feeding.

“J- get down!” I whispered forcefully from the ground already lying on my side.

“There is a big buck off to our left”

He immediately dropped down and spotted the buck.

“Go get him, I have already had some stalks this trip” Jason whispered

“Are you sure?” I asked, already with my bow out and ready to stalk.

“yeah” he replied “hand me the tripod for the video camera so I can film from here.”

As I stalked up toward the buck I kept praying for the wind to shift. It was not optimal for the stalk but being so sporadic and having strong thermals in the area I continued up toward the deer. When I got about half-way to the deer I looked back toward Jason for some type of hand signal that they had not already run off. He gave me the thumbs up so I took out a helmet cam that our friend Ross Baker let us borrow and continued to stalk in.

I got close to where I last saw the buck feeding when I looked up and spotted a deer behind a tree at 40 yards, his head out of sight and only a small opening in the trees. It turned out to be the big buck so I stalked in to get a shot through the trees.

I got in to 32 yards of the deer where I thought I would have a clearer shot but just as I got ready to shoot, the buck started to walk out of my shooting lane. Every time the buck stopped his vitals were behind a tree. I took a step to readjust hoping to get a clear shot when I accidentally sent a small rock rolling down the steep mountain.

The bucks stopped, looked my way, and then began to leave. Not spooked, just walking, but not stopping.

The big buck moved off to the chute to my left yet, continued down almost toward me. When he disappeared I ran to where I could see over the rise, grunted to stop the bucks, drew back, and shot.

The big buck hunched up and continued walking off on his path. I went over and found my arrow. I held for a quartering away shot but had not accounted for the wind. By the looks of the arrow I had hit him farther back than I would have liked so I decided to give him the night and pick up the trail in the morning.

I worked my way back down to Jason. We gathered up our stuff and continued on to a flat spot to sleep for the night. We found a spot in the dark, pitched the tent in 35-45 mph winds and had a cookie boy cookie for dinner (which is an energy bar cookie).

I knew I would find the buck the next day but there is always that doubt in your head which makes sleep near impossible. Of course the ripping winds never help either.

The next morning found us glassing for my deer across the canyon. I spotted what looked like a downed buck but the wind was too strong to keep the spotting scope steady. I figured it was just a tree so I headed over to where I shot hoping to pick up the blood trail.

When I got to my arrow I put down my pack a started looking for blood. I picked up the trail about 75 yards away, where I last saw the buck. I went back to my pack and decided to glass for a minute first. Right after I sat down I picked out a huge buck 600 yards away. My first thought was that it was the buck that I had shot, still alive. I told Jason about the deer and he moved in with the spotting scope to see if it was my buck.

“Hey Rem, did your buck have a drop tine?” he asked

I knew the buck I shot at had a small extra point so I asked him what he meant by drop tine.

About that time the buck turned and I could tell by the width that this was a different monster buck.

“That’s a different buck J” I said “you have to get on him.”

“I am nervous and shaking already” he said.

Knowing the feeling all too well I told him to just pick a single spot on the deer, focus in, look at nothing else and shoot. The same thing I have to tell myself every stalk to remember that I am not shooting at a big deer just a spot on a big deer.

We planned out a stalk together and he moved in as I spotted from across the canyon.

He moved into position quickly to take advantage of the deer feeding below a small ledge. As he stalked in about 30 yards away, the deer started to move off to Jason’s left as Jason moved to the right. I started to freak-out knowing that unless he moved left it would be over.

By this point I was standing up waving my arms frantically yelling for him to look at me for a hand signal, even though I knew that there was no way he would hear me at that distance. Somehow my message must have gone through because Jason moved off to his left just in time to catch the big buck at 30 yards below him.

Not having time to range him he drew back. I could see both him and the deer in the same frame of my binoculars. Jason held drawn back for what seemed like an eternity. It was probably more like a minute and a half, which is an eternity while at full draw.

The anticipation was terrible as I prayed for him to connect with the buck.

He shot and the buck bolted running at warp speed down the mountain. All I could see was blood pouring out behind the bucks shoulder. The buck disappeared out of my view but I knew he had a monster buck down.

I was more excited and nervous watching him than I was for my own deer because I wanted him to get that buck so bad.

Knowing his deer was down I picked up my blood trail while Jason followed his. About 45 minutes later I walked up on my buck, he was a huge 4x5 in full velvet. It was the greatest feeling knowing that my brother and I had taken two monster bucks in the backcountry together. There is nothing I enjoy more in this world than hunting with my family.

Jason had found his buck just before I packed mine down to where he was. His buck ran further than we had expected and left for a hard trail to follow because he was running so fast. His buck ended up crashing almost 3,000 feet below where he had shot from. His buck had cracked his main beam and broken its nose on the fall but everything was still attached.

By the time we finished quartering his buck our dad and his friend Pat Pinjuv were headed up the trail just in time to help us pack the rest of the deer back to the truck. It worked out perfectly. It was the perfect end to an unforgettable hunt.

As Jason put it, bowhunting is an emotional roller coaster; you are nervous, excited, freaked out, worried, shaking, happy, and focused all at the same time.

As bowhunters we know that roller coaster all too well- it is what keeps us up weeks before the hunt, fuels us during the hunt, and keeps us coming back for more year after year.

Sometimes things just work out better than you could have planned. I always have to stop and thank God for times like these not because we both harvested great bucks but because we have the opportunity to get out into his breathtaking country and pursue our passion.

MY ESSENTIAL GEAR: My favorite gear on the trip