A River Bottom Wall to Wall with Whitetail 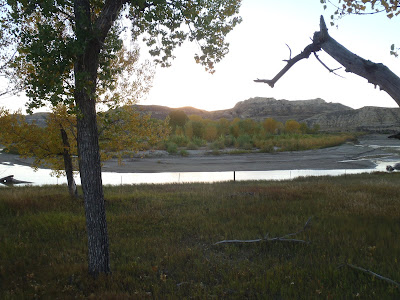 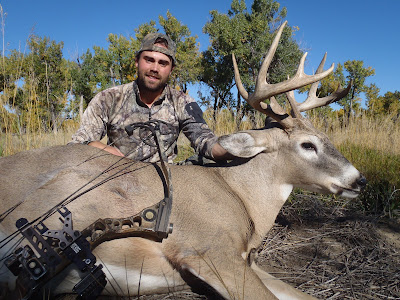 Being a western hunter, spot and stalk is primarily the way I hunt. In all the hunts I have done, I have only taken animals from the ground. I was excited about this Wyoming hunt in particular because I really wanted to harvest a deer out of a tree stand.

I have hunted from tree stands before but to no avail, this is mostly caused by my inability to stay seated for long. The first whitetail I ever took with my bow I was actually sitting in a tree stand that morning but got bored and decided to climb down and stalk in on the deer. However, this hunt was going to be different and I relished the idea of letting the deer come to me for a change.

After packing up my gear I hopped in my truck and headed to Wyoming to hunt whitetails with Jim Gibbs on his Ranch north of Sheridan along the Powder River. When I arrived I could tell right away this was going to be an outstanding hunt because I passed close to 1000 deer feeding in the fields on the way to his house. The last hunters in camp had all seen monster bucks and taken bucks over 140 inches.

Talking with Jim I could tell that there was no lack of deer in the area. The deer herd had not had blue tongue for over 12 years because of the programs they use to control the gnats and mosquitoes in the river bottoms. The buck to doe ratio in the area is close to 1 to 1 and last winter they counted over 1000 whitetails in only a few miles of river bottom. To say the area is unbelievable is an understatement. It really is something you have to see.

Having very limited time to hunt (because I was trying to finish building a new hunting lodge in Montana before the season 3 weeks after the hunt) I decided I would take the first decent buck I could so long as it was bigger than any other whitetail I have take with my bow.

Within 15 minutes of sitting in the stand the deer were headed my way. Jim had their patters on lock down because it was like a caribou migration of whitetail underneath my stand. The deer were moving from the fields in the morning to their bedding area for the day.

At least 100 deer passed under me within bow range during the hour and a half I sat there. I let quite a few bucks walk wanting to see what was out there. I had some really nice bucks come by, but I really wanted to get the kill on video. It would take a buck in the right position with enough time to adjust everything for me to capture the hunt myself.

After watching deer after deer go by I peered around my tree to see a nice 4x4 coming in. He was standing behind the tree at the juncture of two trails, one leading to the side my camera was set up on. My heart was beating and I began to get excited. I decided if he came in on the camera side of the tree I would take the shot.

Sure enough the buck picked the right trail. He walked out and I got the camera on him. He was really close. He was about 15 yards and I was afraid that he would see me so I tried to keep my movement to a minimum. The sun was shining right on the cameras screen so I had trouble telling if he was in the frame or not.

Once I got the camera on the buck he began to lick himself. I used this opportunity to draw back. Just as I got settled in for the shot he began to walk. I moved the camera with my knee still at full draw hoping he was still in the frame.

The moment of truth was coming, the buck was about to move out of my shooting lane. I grunted and the buck stopped in his tracks. I focused in behind the shoulder and let the arrow fly.

The arrow hit the buck square behind the shoulder; the buck took a hop and then went right back to what he was doing. I couldn’t believe it, it looked like a perfect shot yet the deer acted like it had never been touched. The deer had no clue he was hit. I had heard about that before but I have never actually witnessed anything like it.

The deer continued milling around and browsing like nothing had happened. I was sweating bullets, I may have hit a hair high but not enough to not still be a vital shot. The deer continued on for what seemed like an eternity, then all of the sudden he started to lose his feet and dropped right in his tracks, seventy yards from my stand.

I gave him a few minutes before climbing down the tree and checking the buck out. It was a great deer, especially for only hunting one morning. I could not believe the number of deer I had seen that day.

The rest of the day Jim showed me around his property, we saw some killer bucks not to mention half a dozen antelope bucks within bow range of the truck.

The next morning I headed out, having to get back to my building project in Montana as soon as I could (with a couple hour archery antelope pit stop back in Montana of course). All in all I was gone only three days and had one of the best, most laid back trips I had ever taken. It was definitely a hunt I would recommend over and over.

Email ThisBlogThis!Share to TwitterShare to FacebookShare to Pinterest
Labels: Whitetail