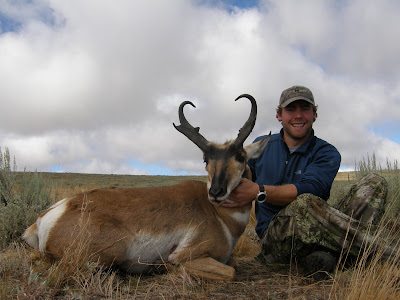 After drawing a great antelope tag Jason was excited to head out to his antelope area. Planing on heading to to help Ross Baker with his elk hunt, I did not think I would be going on Jason's antelope hunt. Getting a call from Ross that he had killed his bull the day I was heading out there meant that I would get to chase antelope with Jason.

By the time Jason got off of work, packed up, and was ready to go it was mid-night, but, we drove out anyway getting to the area just as the sun was coming up. We spent the morning scouting and found a big buck to go after on opening day.

The weather was extremely cold and we were fairly unprepared. It rained almost the whole day and the cold temperatures were unexpected for a August rifle hunt. Visibility was limited by the fog so we tried to get some sleep before the morning.

Opening day we were located where we had spotted the big buck from the night before. We located a shooter buck and moved in on him. We crawled close to a half of a mile over the hard rocky ground with very little cover. Unfortunately some wild horses got spooked by three coyotes scaring the antelope out of range. 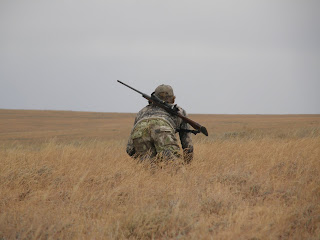 Three hours and many miles later chasing the group from one side of the range to the other we were in position. we were out in the open laying down waiting for the big buck to work our way.

A half hour later the group had moved into 400 yards. Jason got steady and shot.

"you missed" I informed him.

Disappointed we headed back to the truck for an evening hunt.

That evening we drove to another area in the unit. On the way a great buck jumped up by the truck and stood there broadside. It was definitely a shooter but Jason decided to pass, not wanting the experience of getting his antelope by road hunting he opted to let the buck go to see if he could get him later on foot.

Unfortunately the big buck gave us the slip and Jason began to second guess his decision.

Next day Jason missed yet another antelope which is not like him so he decided to shoot at some paper to make sure his gun was on. good thing he did because the gun was way off some how.

After switching to his backup gun he was ready to take a buck.

The next morning found Jason back where he passed the big buck from the road. Getting short on time he decided to go after one of the bucks he had passed up earlier.

After a 4 mile stalk and a long crawl Jason set up on the buck at 400 yards. He got steady and pulled the trigger, putting the antelope down.

Email ThisBlogThis!Share to TwitterShare to FacebookShare to Pinterest
Labels: Antelope